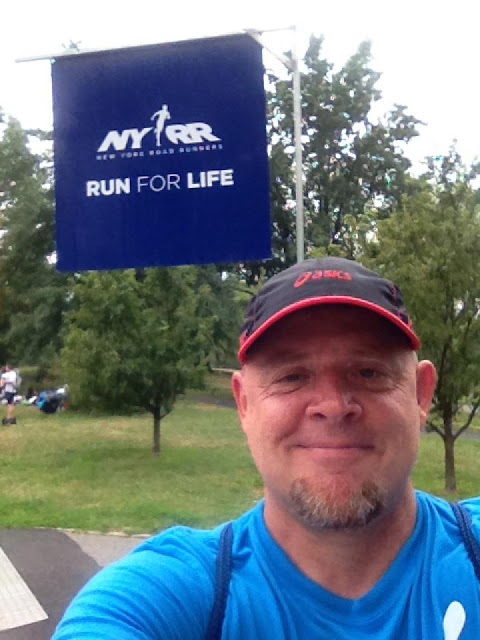 Posted by Mark Newman at 9:07 AM No comments: 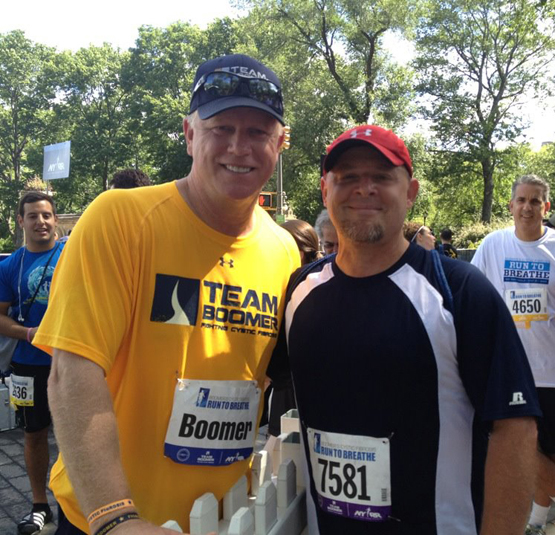 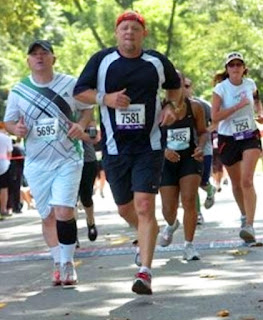 One of the greatest benefits of a running lifestyle is the ability to be involved naturally in important causes. Today I was proud to run with former Jets QB Boomer Esiason in his second annual Boomer's Cystic Fibrosis Run to Breathe 10K at Central Park. The event raises funds and awareness for the Team Boomer efforts to help our friends with cystic fibrosis lead long and satisfying lives. His son Gunnar was born with CF in 1993, and at the start line Boomer told 5,000+ runners that his first goal had been to win a Super Bowl ("Joe Montana wouldn't let me do that") and his goal ever since has been for his son to eventually outlive him. Today, Boomer said, Gunnar is a student at Boston College. I am totally behind the Boomer Esiason Foundation and Team Boomer -- those were real tears and that was real inspiration at our start line today, for me anyway. Our friends with CF go the extra mile to wear ThAIRapy Vests to shake mucus out of their lungs, take breathing treatments with nebulizers, digest a regimen of pills right before a specific window in which they can eat -- a lot of work. I ran alongside Jerry ("YOU CANNOT FAIL") Cahill, 55, on the brutal north hill in mile 3, and he is just coming off double-lung transplant surgery. He was 11 when first diagnosed with CF, and that is the same age as Shayna Hersh, whom I wrote about on MLB.com the day she got to meet her hero, Justin Verlander. When you see someone like them bring cheer to the world on a daily basis, and when you are around the real-life heroic efforts of Boomer and his organization, you appreciate how much they mean and you realize what you can do.

On a less important note but just for my own record-keeping, this was my eighth New York Road Runners race of the year. One more NYRR race plus a volunteer assignment and I will have my 9+1 guaranteed entry for the 2013 ING New York City Marathon! I love Boomer's race on the NYRR calendar and hope it is there for a long time to come. Runners got fist bumps with him at the start line and then he was there to press some flesh at the finish line, and on top of that he ran along with us around Central Park. 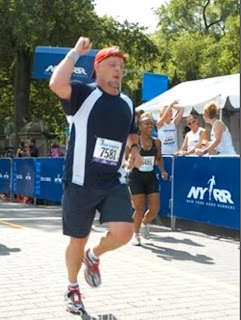 My finish time was 1:06:57 for the 6.2 miles, a full loop around Central Park plus a quick left on the 72nd Street Transverse to the finish line near the bandshell. We ran up Cat Hill and we had to take on the mighty north hill, where I counted backwards from 100 and looked straight down, as my NYRR Team for Kids coach once taught me. The weather was picture-perfect: 65 degrees at the start with 87-percent humidity, a gentle breeze. I did a quick check of my NYRR membership history and it was my fastest 10K since the Joe Kleinerman in December 2009, almost identical for time and pace. I am finding lately that every race I run is my fastest since 2009, a sign of progress that is counter to the body's natural aging process. That happens when you schedule three marathons and some half marathons in the same year!

Now it is time to turn my attention toward long runs. My upcoming races include the NYC Marathon Long Training Run #1 (16-20 miles) next Saturday, July 28; NYC Marathon Long Training Run #2 (20 miles) on August 19; and the NYC Marathon Tuneup 18M on September 23. The marathon, my third of 2012 following the Miami Marathon in January and the Marathon de Paris in April, is on November 4. It will be my 10th marathon or ultra since I quit smoking and started breathing easier myself by becoming a runner back on December 1, 2006. Any other running between now and November 4 will be for endurance and speedwork, mixed in whenever I can around a busy baseball schedule. My goal is to step up my strength training and get more use out of my gym membership!

Yours in running...Mark
Posted by Mark Newman at 1:14 PM No comments: 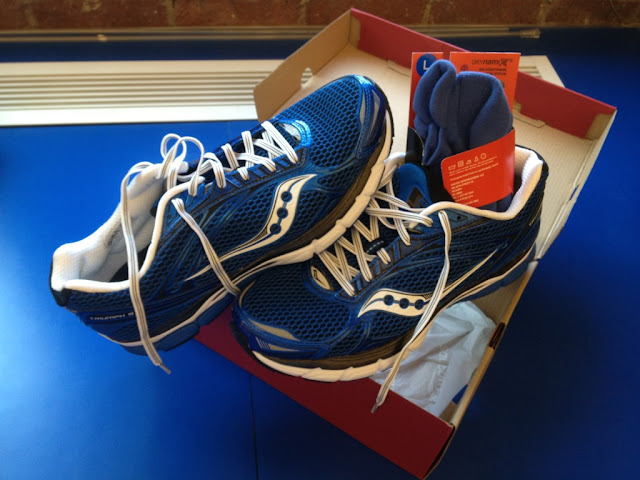 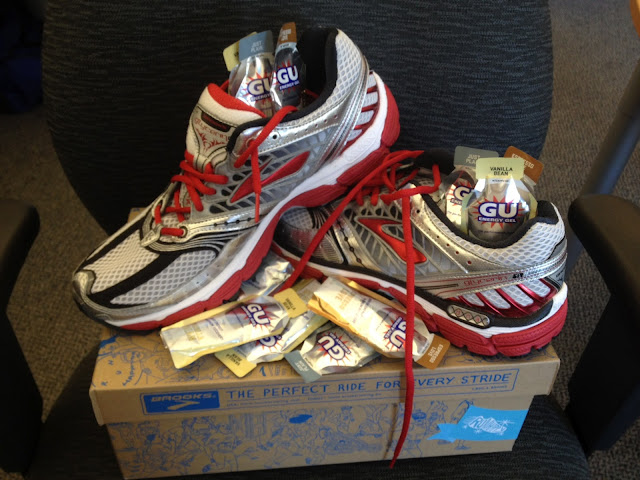 I hated to do this, but now that I'm about 15 pairs of running shoes into my marathoner life, I know that you don't mess with fire. My fellow runners will be able to relate to this, I think.

I bought the Sauconys nearly 3 weeks ago at Paragon near Union Square in Manhattan. Really wanted a pair, as my English Bulldog chewed my only previous Sauconys. But the last two times I ran with these, at the 4-mile mark a blister rub would begin in the instep of the left shoe. The edge of the factory insert sole was rubbing against my instep, and that would be bad, bad news for a Half or a full marathon.

I returned them today to Paragon, and props to the crew there for letting me swap inside of 30 days despite no receipt (I had the same credit card I used to buy them). They are also Neutrals, and I never have to think twice about Glycerin 9s. My advice for anyone just getting into distance running is this: If you find a shoe that works, don't change anything but the color. I wanted this color anyway. I'm set, and their first race is the MLB All-Star Game 5K Charity & Fun Run on Sunday morning in Kansas City, where I'll be running with '08 American Idol David Cook and other cool peeps, plus lots of MLB colleagues.

These probably will be my ride at the ING New York City Marathon on November 4, depending on how cushiony they feel when I am one month away. I have two other trainer pairs I will rotate in.

Nothing in running gear is more important than your shoes, so make sure you don't mess with any potential trouble that could turn into something big. We run for a long time.
Posted by Mark Newman at 3:53 PM No comments:

I belong to an Episcopal church by our house, and in Sunday's service Father Tom gave a sermon about Fear. He used an example of having to attend a Roman Catholic service the previous week and hearing the priest say a half-dozen times that no one can take communion if they are not Catholic. He felt that it was an example of fear tactics, then citing some scriptures. Meanwhile my mind was drifting to the subject of Fear.

As a marathon runner, Fear is a good thing. It is what keeps me going. When you step into your corral before a race, knowing there are 26.2 miles out there to be traversed, perhaps elements to fight as well, you  had better be prepared. When you watch that youtube time-lapse video showing the entirety of the New York City or Miami Marathon courses, all their twists and turns, it can be a scary feeling.

No matter how many of them you have run, Fear keeps you going. You never approach a marathon thinking it is something automatic and comfortable. You know you are going to want your fastest finish, and you are going to train your ass off to get there. You know there are tough times ahead. Fear makes you go out for a run when it is too hot or too cold, when you are too tired, when you are too busy. Fear makes you sprawl out on the grass after that run and do 100 crunches and pushups. Fear makes you go to the gym.

I always laugh inside whenever people tell me that running is bad for your knees, bad for whatever. What they are saying is that they Fear that unknown and cannot rationalize it any other way. It is easier to tell yourself what you have heard, that people get bad knees from running. It is harder to work on quads and hamstrings to offload the strain on knee joints. Fear makes you do that. I needed 14 P.T. sessions to get over my I.T. Band syndrome that ripped up my Miami Marathon in January, when I dragged my left leg for 1 1/2 miles, and Fear reminds me to keep strengthening my hips so it won't happen again.

Fear is what makes me register for multiple races well in advance. Having that scary goal out there will keep pushing you and motivating you. I decided to run three marathons in 2012: Miami in January, Paris in April and New York City in November. I was excited about it but Fear has led the way. Now I can smell the buildup toward my third NYCM and all I can think about is how much it hurt when I got to Harlem in Mile 21, the nausea and the bonking quads. I try to remember only the good things about the Paris Marathon, but I can't forget the whimpering around Mile 20 as a steady cold wind refused to leave me alone and just badgered and butchered me all the way to the finish. Fear is not knowing what to expect.

It is natural to Fear that your body is aging and you might slow down and that one day running will not mean as much as it does to you now. I never want to stop running. I run out of Fear that one day I will. It is in those times that I remind myself why I love it so much, which is an entire other blog post. I'm off to train now.

What does Fear mean to you as a runner?
Posted by Mark Newman at 8:59 AM 1 comment: 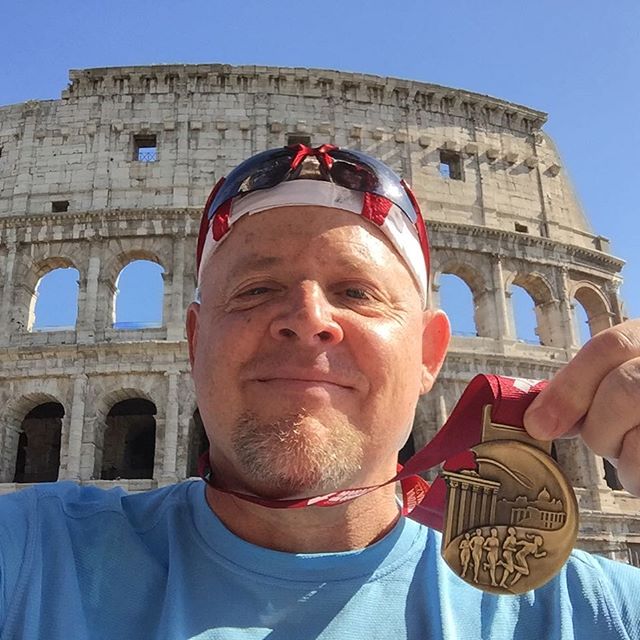